The U.S. and Canada have long dominated international women’s ice hockey, but other countries are closing the gap as the sport grows in popularity around the world. In this post, I highlight the development of the South Korean women’s ice hockey national team over the past 2 decades.

The history and future of this team is dear to my heart, because I am part of it. I’ve skated with the team since 2015 and most recently competed with the team at the 2018 PyeongChang Olympics, where we were granted automatic entry as the host country. We surprised everyone with our performance at the Games. We were ranked 22nd in the world, yet we were competing against teams in the top 8, and we further had to deal with the forced addition of 12 North Korean players to our lineup just 2 weeks before the Games. Although we had a shaky start with back-to-back 8-0 losses to Switzerland and Sweden, we skated to a close 4-1 loss against Japan and a 2-0 loss to defending bronze medal champions Switzerland.

I decided to use the South Korean team’s historical record against Japan to illustrate the Korean team’s development over time in one simple graph. I chose this metric because Japan is the undisputed powerhouse of women’s hockey in Asia and a model for the Korean team. The Japanese program has grown in leaps and bounds since their debut in the Nagano 1998 Olympics, in which they also had an automatic spot as the host country. Japan was the only Asian team to qualify for Sochi 2014 and PyeongChang 2018, and they notched their first two Olympic wins in PyeongChang. 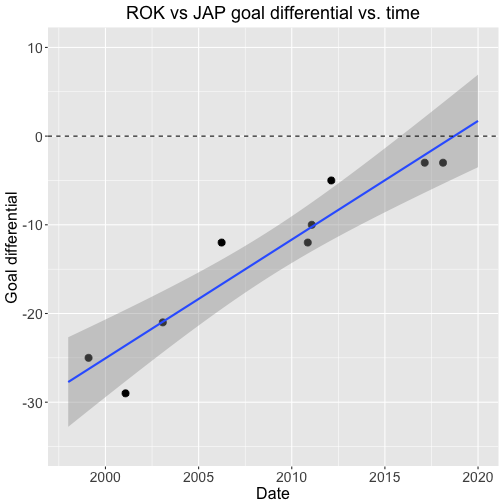 Women’s hockey has never been popular in South Korea, but there is a very small, dedicated group that has kept the program alive and improving since 1999. There is no doubt that the team has grown tremendously over the past 20 years, and today the team is as good as it has ever been. The big question is: How long can this trend continue? Perhaps our first win against Japan is on the horizon. Alternatively, the growth could level off or even turn downwards as support for the program declines after the Olympics. The future of the program depends partly on the continued efforts of the current players, but also on funding, organizational support, and the success of the 2018 Olympics in inspiring a new generation of Korean girls to play the game and one day fill our shoes.

Time will tell. For now, all we can do is keep on skating.

I included the “Unified Korean Team” in the data for South Korea since the team was essentially South Korea with a few North Korean players logging limited minutes on the ice. Moreover, the IIHF seemed to take this into account: after the Olympics, our international ranking improved from 22nd to 17th, while North Korea declined from 25th to 28th.