IMPORTANT NOTE: This is an out-of-date version of btw. For the up-to-date version (which includes Windows compatibility, support for BayesTraitsV3, and a much simpler approach to specifying BayesTraits commands), see here.

This is an R package for running BayesTraits from R (Mac OS and BayesTraits V2 only). The functions work by using system to run BayesTraits on your system and delete the output files after importing them into R.

BayesTraits was developed by Mark Pagel and Andrew Meade, and is available from their website as an executable file that can be run from a command line program such as Terminal. Consult the BayesTraits documentation before using btw.

I think there are two major advantages to using btw rather than running BayesTraits from the command line. First, if you are comfortable with R, btw makes it easy to incorporate BayesTraits into R scripts. Second, btw automatically pulls the output of btw into R in a ready-to-use format, which greatly simplifies your workflow if you want to analyze your BayesTraits output in R.

Below, I demonstrate usage of btw.

Before using any of the functions that call BayesTraitsV2, you have to download Version 2 of BayesTraits. You then have to tell btw where to find it on your computer by defining the hidden variable .BayesTraitsPath. You have to do this every time you start a new R session. Be sure to specify the FULL path.

The package includes some examples of tree and data files. You can load them into your R session after you load btw:

Some important formatting points that apply to the data for the Discrete and Continuous functions:

Now let’s use btw to run some BayesTraits analyses.

Multistate is used when you have data on a single categorical trait. An example of this sort of data is `primate.discrete1’, which contains data on trait that takes 3 discrete values (0, 1, and 2). Viewing the data reveals one missing value (Colobus_polykomos) and one ambiguous value (Hylobates_agilis).

The likelihood ratio test is not significant, indicating that we should favor the simpler model. In this case, the symmetric model is simpler because it only estimates one parameter, while the asymmetric model estimates six.

Another way to get at the question of whether there is evidence for multiple rates of evolution among the 3 character states is to run a reversible jump model, which will sample across models in proportion to their likelihood and return a distribution of model structures. We will also take phylogenetic uncertainty into account by sampling across a block of 100 trees, primate.tree100.

We can use the function rjmodels to get a quick summary of the models sampled in the reversible jump analysis.

Output indicates that an extremely large number of models were sampled in the posterior distribution (406!) and the top ten models represented an extremely small proportion of the total sample of models (the best model represented about 4% of all the models). This indicates that support for any one model over other possible models is weak, and in light of this, the simplest model should be chosen (i.e., all rates equal).

Fossilizing and reconstructing an ancestral state

Next, let’s compare an unconstrained model to a model where we fossilize the ancestor of Homo_sapiens and Hylobates_agilis to be 2. And let’s do it in a Bayesian framework.

The Bayes factor is 2.778082 and the unconstrained model is preferred. We can also estimate the probabilities of different ancestral states for the Homo_sapiens/Hylobates_agilis ancestor. Let’s use maximum likelihood this time (the default setting).

Results indicate that there is only a 29.7% chance that the Homo_sapiens/Hylobates_agilis ancestor was in state 2, which is consistent with our finding that the model where we fossilized that ancestor at 2 was significantly worse than the unconstrained model.

Let’s do the significance test for correlated (i.e., dependent) evolution for the two traits in maximum likelihood mode.

The difference is not significant, indicating that the simpler model (no correlation) should be preferred. The output from these models can be a little confusing, but the plotdiscrete function allows visualization of the results. 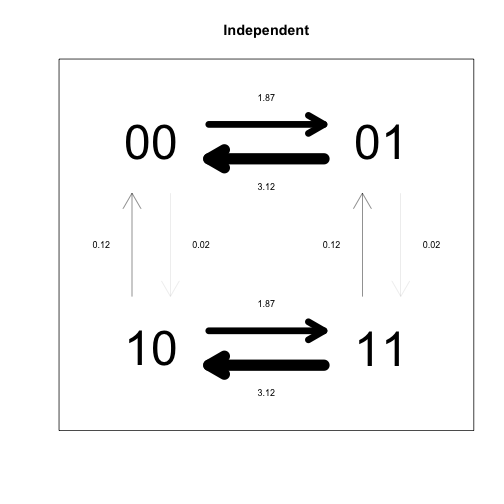 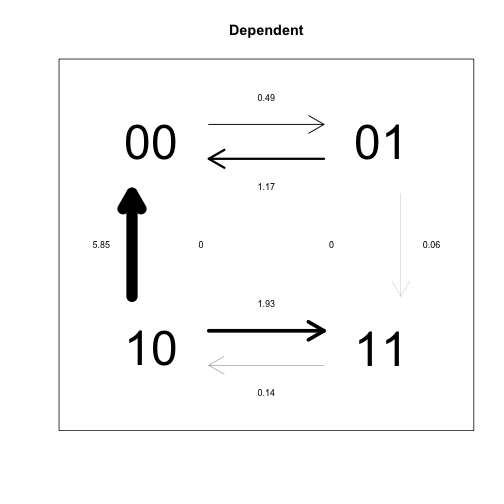 In this analysis, each pair of states for the two traits is treated as a separate state (00, 01, 10, 11). The independent model forces some pairs of rate parameters to be identical, because the idea is that transition rates for each trait should be the same, indepent of what state the other trait is in (this leads to 4 overall parameters). By contrast, the dependent model assumes that transition rates for each trait depend on the state of the other trait, such that different rates need to be estimated (leading to 8 overall parameters). Due to the different constraints imposed on the two models, their transition rate matrices look very different, but as the likelihood ratio test demonstrates, the difference is not significant.

The Continuous function can be used to compare models of evolution for one or more continuous traits. The format for the data files is the same as for discrete traits.

Continuous supports the estimation of several parameters that correspond to different models of evolution. Perhaps the most widely used of these is lambda, the phylogenetic signal parameter developed by Mark Pagel (1999). Let’s test the hypothesis that the maximum likelihood estimate of lambda is significantly different from 0 for a single continuous trait.

The p-value is not significant, so there is no evidence that lambda is different from 0 (which corresponds to no phylogenetic signal in the data).

The p-value is not significant, so there is no evidence for a correlation between these traits.

A convenient thing about running BayesTraits with btw is that the output from Bayesian MCMC analyses are basically ready to be analyzed with the R package coda for doing MCMC diagnostics. Here, I provide some examples of how coda can be used to do health assessments for MCMC chains. First, let’s make some data (this won’t be pretty… the point is just to see how it works).

Now load the coda package (if it isn’t already installed, then install it!).

In one easy step, we can prepare the MCMC output for analysis in coda. The key is that coda functions work on objects of class mcmc, so we need to convert columns from our dataframe into mcmc objects before using coda plotting functions. We can do this by wrapping the variable we want to plot with the mcmc function.

Here is a density plot for the likelihood. 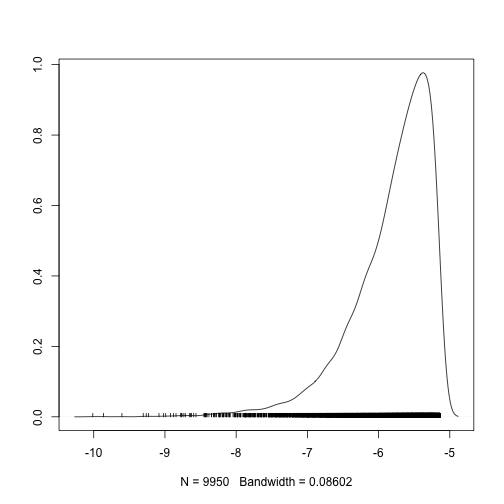 Here is a trace plot for the likelihood. 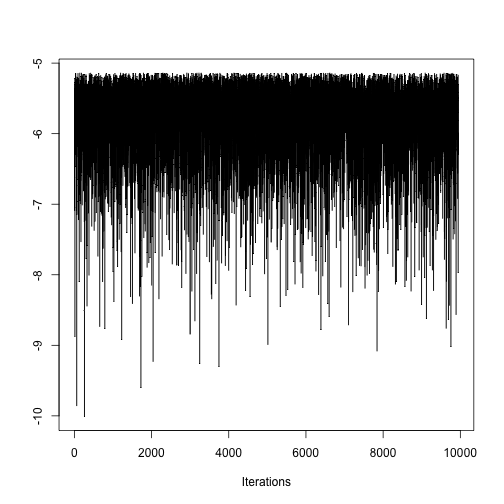 Here is an autocorrelation plot for the likelihood. 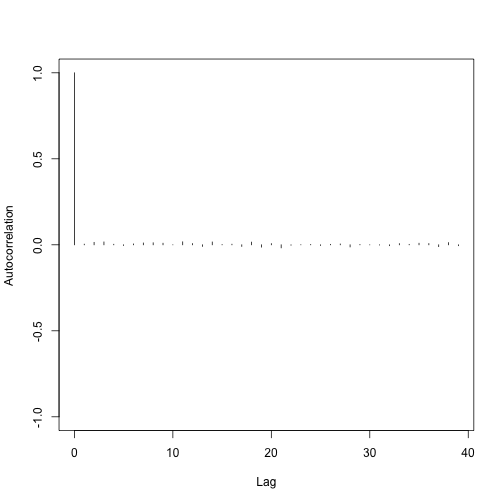 This all just goes to say that btw makes it easy for you to use the tools provided by coda to do MCMC diagnostics. Check out the coda documentation for more info!