Olympic history: Over a century of growth

This is my first post analyzing data on the history of the modern Olympics, which I scraped from www.sports-reference.com. I’ll keep this one short and sweet. My goal is simply to provide a broad-strokes overview of trends in Olympic participation, focusing on growth in the number of athletes, nations, and events. I will delve into more nuanced topics in future posts, for which this post will serve as a backdrop. 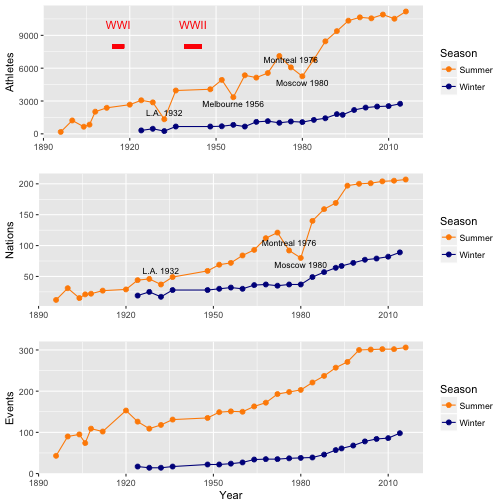 You can see two long periods without any Games between 1912-1920 and 1936-1948, corresponding to WWI and WWII. In addition, a few Games are highlighted where dips occur in one or more of the plots:

The growth trends start to level off roughly around the year 2000, at least for the Summer Games. The list of events and athletes cannot grow indefinitely: the Olympics can only hold people’s attention for so long, and hosting more athletes and more events costs money. The Summer Olympics may have reached a saturation point near the turn of the century, with around 300 events and 10,000 athletes. The Winter Olympics would seem to have more growing room, but ice and snow sports are not practical or popular in most nations, and that doesn’t seem likely to change soon.

In my next post, I’ll zoom in on a largely forgotten aspect of the Olympics from the first half of the 20th century: the Art Competitions.